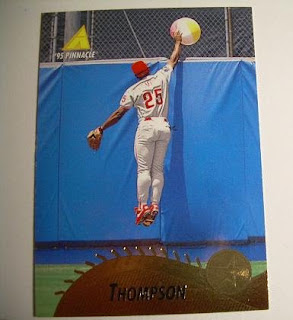 It's no wonder that the Phillies traded Milt Thompson in the middle of the 1994 season. He thought summer was for beaches.

Apparently Thompson mistook the blue wall for the waters of the ocean and brought his beach ball out to the field only to realize he was still in the ballpark.

Quickly realizing his mistake, he slam dunked the ball over the wall.

Sadly for him, a ball was hit to left before he was done, and the routine fly out resulted in a triple.

Thompson was promptly traded to Houston the next day.
Posted by Andrew Harner at 2:18 PM