Collection with a Meaning 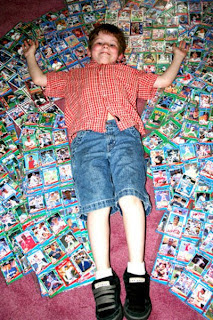 Dayton Peters is pretty much like all other nine year old card collectors, but a recent addition of 945 cards to his collection means a little bit more than it would to any other collector.

On his ninth birthday, Peters' parents gave him a binder of all the cards he had collected in the past nine years. However, a waitress at the restaurant they were at saw that Dayton had a card collection.

Dana Davis knew her late son had a collection of cards and that her son and Dayton had a friendship before the tragic 2004 military accident that killed her son.

Spec. Daryl Davis followed in the footsteps of Dayton's uncle Tyler Peters and met Dayton though him. The two then developed a friendship that is still strong in Dayton's mind today.

Because the two were friends, Dana wanted to give Dayton Daryl's small collection of cards. As you can see in the picture, the cards are nothing special to an advanced collector as they are just old commons, but to Dayton, they will always mean more than that.

And while Dayton's best memories of Daryl lie in his mind and a black three-ring binder in his living room, he knows that Daryl is a hero.

"He's a hero because he was helping other people," Dayton said.

For a full story about Dayton's collection, click here.
Posted by Andrew Harner at 8:26 PM