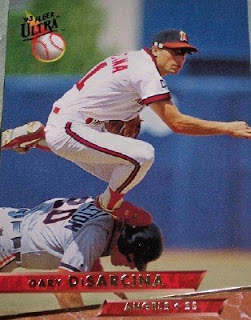 Before I start, let me give you a little biographical info on the two subjects on this card.

Now, I'm pretty sure that in a straight up fight, Tettleton would win every single time.

But, if you first let DiSarcina jump onto Tettleton, the results may vary.

That exact scenario happened way back when DiSarcina was a young shortstop with the Angels and Tettleton was a fierce power hitter for the Tigers.

Some time in either 1992 or 1993, DiSarcina got the better of Tettleton during a double play, and an Ultra photographer was there to capture the action.

Look at DiSarcina's form as he kicks Tettleton's head while he is down to ensure that Tettleton knows he is out.

Of course, in his mind, Tettleton saw himself starting a brawl at second base like he was playing against DiSarcina in MLB Slugfest.

Yes, Tettleton could see the future and knew that MLB Slugfest would first come out for major gaming systems in 2003. He was also the first in line at the stores, and immediately played the Tigers against the Angels only to be disappointed to find that DiSarcina was nowhere to be found in the game.
Posted by Andrew Harner at 3:59 PM