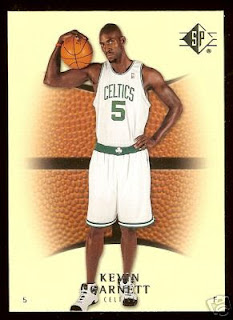 Everyone was rooting for the Hawks to pull the upset (well, except for those who root for the Celtics).

However, 99-65 later, the Celtics are advancing like they were expected too three games ago. Without a key trade in the off season involving Kevin Garnett, none of this ever would've happened, as Boston would've been chilling at the bottom of the league again.

And what the Celtics did with the trade and playoff run, Garnett rookies have done the same.

His best card, 1995-96 Finest, is always a popular seller but this season it has seen increased action and probably will do the same next year if the Celtics continue to dominate the East.

Right now, even common Garnett's such as this SP Authentic have been getting bids on eBay.
Posted by Andrew Harner at 1:21 PM