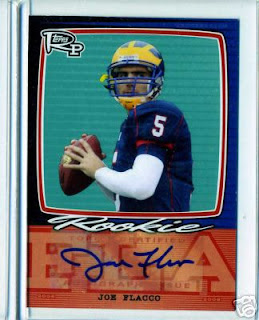 Topps Rookie Progression (formerly Topps Draft Picks and prospects or Topps DPP) hit shelves on Tuesday with collectors in a flurry to get their favorite rookie's first issue from Topps.

While Joe Flacco isn't my favorite rookie from this class at all, I think he is being vastly under appreciated by collectors.

Everyone is high on Matt Ryan because he was the third overall pick, but I personally believe Ryan is going to be the next Tim Couch, Ryan Leaf, etc.

Collectors are also very high on Brian Brohm because he was drafted by the Green Bay Packers and is expected to battle with Aaron Rodgers to start next season.

Don't get me wrong, Flacco is getting his due, but I have seen more people interested in Brohm cards than Flacco cards.
Posted by Andrew Harner at 11:23 AM