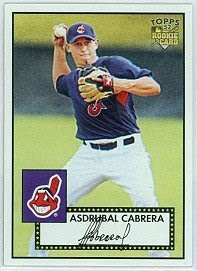 Chances are if you think about an unassisted triple play, a Cleveland Indian may come to mind.

After Asdrubal Cabrera turned one in game two of yesterday's Indians/Blue Jays double header, the Indians now have three of the 14 unassisted triple plays in baseball history.

The first was in 1909 when Neal Ball turned one and the second was in the 1920 World Series by Bill Wambsganss.

The last unassisted triple play in the Majors was last year when Troy Tulowitzki got three quick outs against the Braves. The last in the American League was Oakland's Randy Velarde who turned three by himself against the Yankees in 2000.

However, such a rare feat hasn't done too much for Cabrera's cards. His 28 listings on eBay include eight of the 2008 Topps Co-Signers dual autograph with Robinson Cano, and all but one were posted before the triple play was turned.
Posted by Andrew Harner at 9:36 AM