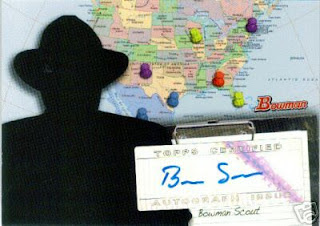 The 2008 Bowman release brought around a lot of new changes for Bowman including a new, flashy base design and the release of Bowman Scout Autographs.

The autograph set features Bowman scouts who discovered superstar players like Derek Jeter, Ryan Howard and Alex Rodriguez in their own autograph set.

However, Topps being who they are, decided to throw in a mystery scout.

This scout is the one who signed Albert Pujols and is featured in a black silhouette wearing a cowboy hat who simply signed his name "Bowman Scout."
Posted by Andrew Harner at 8:28 AM