Dick's Sporting Goods to have the next retail exclusives 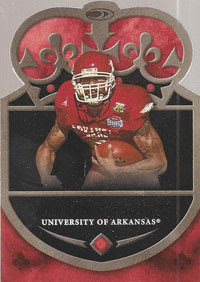 Donruss and Dick's Sporting Goods have teamed up for a great promotion involving 2008 Donruss Threads retail boxes which will allow collectors the chance to get he best rookies from this year's draft class.

The ten card set, entitled Rookie Crown Collection, features the likes of Darren McFadden (above), Jonathan Stewart, Felix Jones and Joe Flacco. The cards will feature the player's in their college uniforms.

In the past few years, many companies have been producing retail only cards exclusive to certain store. Press Pass has featured a star rookies set of Wal-Mart cards each year since the trend began in 2006.

Target seems to have been the choice store of many card companies since this trend started. Leaf Rookies and Stars had a whole series of Target Longevity cards that could pulled from boxes in 2006 and Press Pass also released a nine card Target set that additionally included four autographs. Ultra was also on board the Target Express with Target exclusive Lucky 13, autographs and regular rookies along with Upper Deck who produced a set of Target exclusive rookies and rookie autographs.

So far in 2008, there is the Press Pass Target rookies and autos and the Upper Deck rookies and autos. Topps also produced a special Target edition rookie jersey cards for factory sets in 2006 and 2007.

So with Dick's now getting its own card set, is Meijer the next retail chain to be included in the retail store set posse?
Posted by Andrew Harner at 3:19 PM