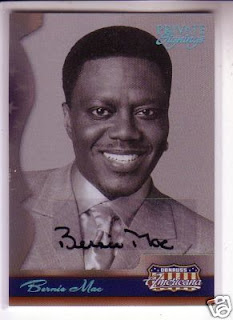 As you have probably heard by now (I didn't as I was couped up at work all morning), Bernie Mac has passed away at age 50 due to complications from pneumonia.

Known more for The Bernie Mac show and his role in the Ocean's Eleven movies, Mac captured baseball fans with his role in Mr. 3000. Last year, he made his mainstream trading card debut in Donruss Americana and again in 2008 Donruss Celebrity Cuts.

Already a semi-popular seller, Mac's death has pushed his trading card prices to new highs. Previously, a 2007 Americana autograph like the one pictured above sold for $18.50. Today two are available for bidding with one standing at $33 with 23 hours left and a second at $55 with one day and six hours left.

Sadly, people will be selling this card simply to profit off his Mac's death. It happens with any celebrity or sports star and is unavoidable. I never understand why people pay the inflated prices for these cards right when someone passes. I remember back when Cory Lidle died in the New York plane crash and everyone was trying to sell off their Lidle's knowing he would be in high demand. Today, just one listing appears in a search for Cory Lidle.

However, Mac's death could cause a phenomenon like Heath Ledger's death did to the new Batman movie. With four movies in post production, many hardcore Mac fans and even some who aren't will be attending the theaters to see these movies if they do come out.

Hopefully, year's down the line, we will see some Mac cut signature cards on the market, perhaps in his Milwaukee Brewers uniform from Mr. 3000.
Posted by Andrew Harner at 10:32 AM