Topps Total? Upper Deck 40-Man? I'll do you one better (or bigger) 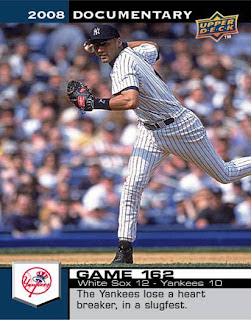 The 6,500 card Yankee Stadium Legacy set? A great ideas by Upper Deck. Upper Deck Documentary? A little insane, but not necessarily the worst set ever.

According to various blogs out there, Upper Deck Documentary is Upper Deck's answer to Topps Moments and Milestones, except they are producing 166 cards for every single team. For those who aren't good in math, that's 4,980 cards which come in $2.99, 15-card packs.

Collecting every card for you favorite team will be a chore because they will be mixed up with 4,814 cards of other teams, but with Gold parallels of every card, collectors can take their chase to another level once they get all the regular cards. Player collectors should also be able to get their fill of their favorite player. There's bound to be several Jeters, Howards and Santanas to get your hands on. While the cards don't specify the player anywhere, the player is still there. So it may be difficult to master a player checklist, but it should be doable with the help of other collectors, eBay and maybe an Upper Deck player checklist.

Not being a huge team collector, this is just another release on the the calendar for me (December for those who want to start counting days). How do you plan on collecting this set? All I am planning on doing is getting as many Indians as I can and getting all the Victor Martinez cards.
Posted by Andrew Harner at 7:37 PM

I'm planning to get the fill 166 card Braves team. If I can buy it complete, I'll do that. Otherwise I'll pick up lots here and there on eBay or through trades.

I think all the Upper Deck people get together and said "Lets make it big."