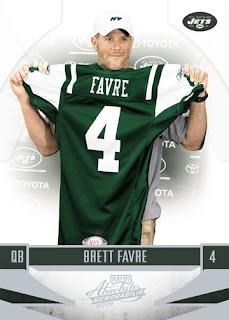 Upper Deck and Donruss have both released photos of some of the New York Jets Brett "Broadway" Favre cards that will be available very soon.

For Donruss, a photographer was on hand to get a picture for the Absolute Memorabilia set. However, this card will only be available as a short print in retail products since the hobby version of the set is packaged and ready to be shipped out. It is unknown how short printed the card will be.

All football fans, and most sports fans, know that Joe Namath was known as Broadway Joe during his tenure with the Jets. Upper Deck is now hailing their new quarterback as Broadway Brett, a slap to the face of Namath. How can Favre be given such a prestigious and historic nickname without throwing one pass in the city? If anyone knows, please tell me because there is nothing saying isn't going to the tank this season. I know there isn't anything saying he won't lead them to the playoffs, but I really think Upper Deck is taking quite the risk with the new letterman cards they are producing for Upper Deck NFL Icons.

The 13 piece letterman will be inserted as a redemption card to collectors and spells out "Broadway Brett" and features a photo of him from yesterday's news conference.

On a day when Upper Deck was praised by Mario A. of Wax Heaven for producing a far nicer autograph of Michael Beasley than Topps did, I think they have done themselves just as equal an injustice by producing these cards of Favre."
Posted by Andrew Harner at 4:34 PM

Sorry man but having no interest in football I didn't know about Namath's nickname.

I agree it is pretty low...

I sure hope Donruss is going to airbrush out those extra fingers on Brett's right hand!