Has the next Ryan Leaf arrived? 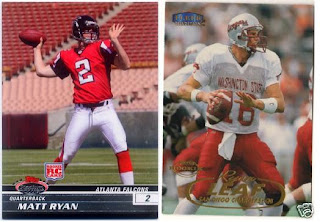 I'm going to go ahead and say it up front: Matt Ryan will be the next Ryan Leaf.

No seriously, I really think that.

Ever since Matt Ryan was hyped up before the NFL Draft, I had my doubts simply because he always reminded me of Ryan Leaf. Just take a look at the similarities:

So maybe the last two are just fun trivial facts, but the ones above are very intriguing similarities that are keeping me away from Ryan's cards. Hopefully the Falcons don't decide to rush him into the NFL which could also ruin his career, just ask Tim Couch about that.

So how many of you think I should go to the nut factory now? I answer that by saying someone has to make the bold predictions because you almost never see anyone making a prediction about how bad someone will be. The truth of it is that now everyone turns out like they appear they will, and I think Matt Ryan is next on that list.
Posted by Andrew Harner at 5:43 PM

Just from what I've gathered and assumed randomly, one thing that separates the two is 'makeup.'

Leaf was just a cocky, immature jock who was a lunkhead. He had all the ability in the world to be a No. 1 quarterback, but basically couldn't conduct himself as a professional.

I would assume Ryan has no such problems [as of now] and is more mature.

It certainly looks like Ryan has Leaf beat in that aspect, but I'm still not convinced their careers won't take the same downward spiral.

Matt Ryan has utterly destroyed my lifelong love of the Falcons and I wish him many, many painful bone crushing sacks from defensive ends jailbreaking that hideous offensive line and hours of watching his opponents score at will on the Falcons crappy defense because management decided selling jerseys was more important than getting Glenn Dorsey to anchor the defensive line for a decade.

Seething burning irrational hatred and loathing tortures my very soul at the mere sight of a Matt Ryan card. Argh.

Ryan and leaf both had good first NFL starts
then Leaf fell apart,
and Ryan is currently 4/18 for like 40 yards and 2 picks.

wow were you wrong...