Time for Quinn to shine 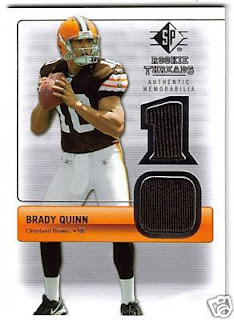 Not only did the entire starting roster for the Cleveland Browns look terrible last night, their starting quarterback may miss some of the regular season with a concussion. However, this could also be a good thing for the team and especially Brady Quinn.

Quinn, the team's second first round pick a year, was expected to be the starter by mid-season as neither Charlie Frye nor Derek Anderson had proved themselves in the past. However, a week one trade of Frye gave the Anderson the reigns and he never let go passing for 29 touchdowns and 3,701 yards.

Last night, Anderson looked shaky even before the sack that was his final play of the game by not getting a team a touchdown, not getting them from inside the Giants five which led to a blocked punt for a safety and subsequent free kick return touchdown and also botched a hand off to Jamal Lewis which turned into a 95 yard fumble recovery touchdown for the Giants.

Quinn, however, looked sharp and needs to take advantage of this door opening despite the unfortunate circumstances that are making it possible.

Quinn compiled a 69-yard touchdown drive as soon as he entered the game which ended on a backwards touchdown pass to Syndric Steptoe. Quinn later threw a 44-yard touchdown to Steptoe that was seen in to plays on ESPN.

Sure Quinn wasn't playing with the first team or against the Giants first team, but he is all but assured to get the start against the Lions and likely the Bears to close out the preseason. While the Lions first team defense is nothing special, the Bears will provide Quinn with a challenge and if he can face that challenge well, Anderson may be in trouble and out of his starting job sooner than expected.

By only taking part in one little drive last year, Quinn's cards took a huge nose-dive as the season rolled on. While he's not close to the bottom of the barrel, his market value is still lower now than it will be if he turns out to be a successful Browns starter like planned. For the football investors out there, you probably already have a Quinn autograph, but if you don't, this may be a good time to get your hands on one.
Posted by Andrew Harner at 8:10 AM