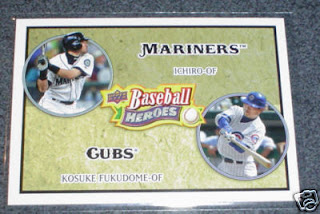 Outside of the parallels, the set is an excellent extension of the early 1990s insert set that featured legends of the game like Reggie Jackson and Johnny Bench. Today, the set has 175 single players, 10 dual heroes, 10 triple heroes and five quad heroes which mix and match current stars with each other or legends and current stars.

Upper Deck again makes player and team collecting harder than it needs to be by producing all of these random parallels. I'm completely alright with having one or two different colors to chase, but does anyone really want to have to find 11 cards of their favorite player? Just think about those player's that appear on more than of the dual, triple and quad heroes cards. How does that player collector feel right about now?

But collectors can also expect to find four hits in every eight card, 24 pack box with three relics and an autograph falling on average. However, with a $100 price tag, the secondary value of these hits make buying a box of Baseball Heroes a risky proposition.

So when you combine the ridiculous parallels with the secondary value a box will most likely yield, I have to say stay away from Baseball Heroes.
Posted by Andrew Harner at 1:25 PM