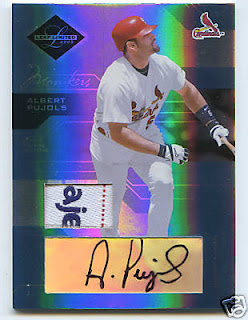 I am opting to not make a post showing my frustration with the new Beckett site because I pretty much echo everything everyone else is saying. But I will say that I am quite disappointed the message boards are not set up like they used to be. They were a great place to find current issues and news with the hobby. Now bloggers like myself have to turn to other hobby sources to find out what collectors are talking about.

Two of those places are The Bench and Sports Card Forum. While perusing the two sites this site, I ran across an interesting thread on SCF about an Albert Pujols fake patch and autograph.

To summarize what happened over the course of the three pages, a supposedly veteran collector posted a link to this eBay auction explaining how this card had to have a fake patch and a fake autograph. His reasoning was that the autograph isn't straight lines and the patch window isn't straight, meaning no machine produced it. He then proceeded to explain how he reported the auction and accused the seller of shill bidding as well.

Thankfully, some other smarter collectors also viewed his post and quickly showed him why he was wrong. By providing other examples of Pujols autographs that looked similar, pointing out the card is a 1/1 and showing him how someone's opinion can be wrong, other members still could not convince this guy he was probably wrong.

Later on, the original poster added to his argument (and hurt his credibility at the same) by saying that the auction listed the card as 2003 in the description. Using that information (which turns out to be incorrect), the collector used a Beckett OPG to show that there is no 1/1 Monikers insert in 2003 Leaf Limited. Needless to say, several collectors quickly pointed out that the card was a 2005 and that 2004 stats appeared on the back.

The purpose of sharing this thread is two-fold.

First, for all of those who said that the Beckett boards were just full of idiots, I now show you that it wasn't just on Beckett. There are ignorant collectors everywhere, and I think all of you need to understand that instead of just bashing on Beckett.

Second, all collectors need to do their research first when they find an auction on eBay that has a questionable card. This collector reported the auction to eBay then bragged about it on SCF instead of getting the opinion of SCF members first. I assure that the collector isn't as seasoned as he thinks he is since he did what he did. Established collectors like myself, Mario A., dayf and other people who deal with this hobby everyday always do our research before we put anything into a public forum or our blogs.

The seller of the Pujols could be in a world on confusion if his auction gets pulled. Say he pulled it from a pack of the product. Will his justification that he pulled it from a pack be enough to get it back on eBay and safe from others' accusations? What if he bought from someone at a show or on eBay? He will now think he get scammed by someone when he didn't. If he has to relist the card, will it get the same high price? That's hard to say because collector's may be lenient to bid on the card knowing it was pulled from eBay at one point.
Posted by Andrew Harner at 7:36 AM