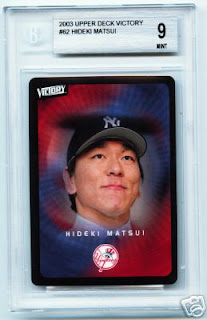 I know I'm probably starting to sound like a Beckett basher on this blog, but trust me, that isn't the case. They've just been giving me good material lately, such as this Hideki Matsui rookie card they have on eBay.

Did you know that Matsui played for the Yankees in 2000? I sure didn't.

You know how a lot of time the seller will just have either the title or the description mislabeled, but Beckett has managed to mess them both up while their image clearly states this card is now from 2000.

When I saw this listing, I was really hoping the card was mislabeled on the BGS holder as well. That just would've been hilarious.

Besides that mistake, Beckett has probably listed this card at a price no one plans to pay. A Green parallel graded 10 by BCCG recently sold for a total $3.74 so how does Beckett think anyone will pay $10.99 for one of these?

I also don't find anything too special about this card. Do you?
Posted by Andrew Harner at 7:23 AM

Man,everything Beckett sells is pricey. It's like buying from a card shop at the mall.

I must be behind the times, but I didn't realize that Beckett was selling cards on eBay. Wouldn't it be in their interest to keep prices high in their price guides to bolster the price they get from selling cards? I know that Gellman has been complaining about Beckett conflict of interest because of advertising in their mags, but I don't remember this being mentioned before.

I agree completely with the last post. The thought of a price guide/grading company actually selling cards seems at the very least to be a conflict of interest, and more likely unethical. Fairly typical for Beckett though, they have a history of shady dealings.

every one knows beckett and upper deck keep the prices up so we pay more for packs and graded cards.Only in The USA