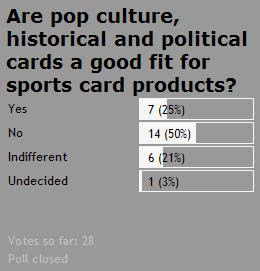 As many collectors know, companies have moved towards producing cards of historical figures, politicians and other pop culture icons and throwing them into sports card products. With the presidential election of 2008 looming, these cards are at an all-time high and slowly becoming one of the all-time lows of card collecting.

These types of cards began popping up in the early 2000s when they were just innocent, novel ideas such as Topps American Pie and the few president cards that were found in 2004. However, when collectors voiced they these were a good idea back then, the companies took notice in a big way.

This year, it seems that every single baseball set and several football sets have presidential campaign cards, presidential and historical cut signatures, or military personnel falling in many packs. Upper Deck made it a contest disguised as gimmickry, Topps made it gimmickry and Donruss made it a non-sports set. Yes, one company got the memo that sports card sets are for athletes of the particular sport the set is designed for.

The readers of Cardboard Mania have decided these cards are bad for the hobby, but another group sit on the fence undecided. Hopefully with the presidential race over next year, these cards will simmer down a little and slowly be phased out.
Posted by Andrew Harner at 4:23 PM

Historic, cultural, and political inserts are an "all-time low?" I think you're really reaching on this one. Baseball is part of pop culture, so it's natural that the two would intersect. You acknowledge that much -- the same sort of thing popped up in 2004, for example. What I fail to see is how this is "bad for the hobby." Really? This is the issue you have with the hobby? Not ultra-high end products, or investors/prospectors?

Besides, given the almost complete ignorance by many Americans of anything historic or political, I'm glad they're looking at a card with Harry Truman and Thomas Dewey on it, or reading a card back and finding out about Harriet Beecher Stowe.

This is one of many issues I have with this hobby. Please see the poll here:

Those are all bigger issues facing the hobby and you can see quite the discussion about the results.

I was fine with these types of cards until they started to appear in every single set that is produced. They got old real fast just like those gimmick cards.

"Issues?" I mean, calling them issues suggests that 1. they're a widespread problem, and 2. there's a call to do something about it. Certainly these things bug you and your peers, but I don't see them being a general issue with collectors. If they were, people wouldn't buy sets with non-baseball inserts. As far as I can tell, stores don't have any problem moving these sets with non-baseball inserts.

Honestly, if it's getting real old, and you think it's gimmicky then don't buy the cards. It's a pretty simple solution. But the truth of the matter is, Topps/Upper Deck aren't stupid. Collectors eat this stuff up. Why else would they be doing it?

If Topps wants to Photoshop Rudy Guliani into a card, and Upper Deck wants to turn Hillary Clinton into Morganna, then whatever. I have bigger things to worry about. In the mean time, I'll still be collecting baseball cards, since after all, it's just a hobby.

I don't understand how you get off basically thinking I don't love this hobby. I'm not the only one who has talked about these things in the blogsphere. This issue is not as widespread as others, but there is still a concern especially since companies are now producing non-sports sets. Shouldn't these cards be in those sets?

Well, Allen & Ginter is pretty much *the* most popular baseball card set, and it's filled with non-athletes. So there are definitely a lot of collectors that like the idea. I think the key is that the card companies shouldn't overdo it and have non-athlete cards in every product. If it's only a few products per year, then I'm fine with it.

Thank you Fielder for realizing the point of this. I don't care that they are thrown in every now and then. A&G wouldn't be A&G without them. The sets that pay homage to the original sets or to a theme (Topps American Pie and A&G) are OK, but why does regular Topps and Upper Deck have to have these types of cards?