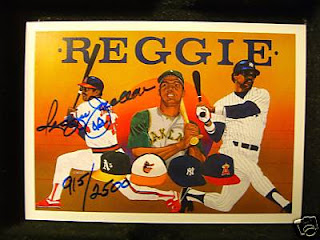 Had Upper Deck realized what this card started, they would have produced more autographs during the dead years of 1991-1995
Back in 1990 when Upper Deck had Reggie Jackson sign 2,500 cards for the Jackson Heroes set, no one could have imagined what it all started. Year by year, more and more autograph cards came out until we had a full blown set of autographs in 1996 Leaf Signature Series. But as certified autographed trading cards gained popularity with collectors, the companies discovered they needed to find an alternative way of getting players' autographs. 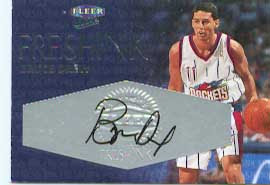 The first stickers autographs reached mainstream sets in 2000. SAGE started to use stickers in 1998.

Starting in 1998, sticker autographs began to emerge in place of the traditional hard-signed, or on-card, autographs. They were started by SAGE in their college basketball and football releases and finally reached professional sports card with 1999-00 Ultra Fresh Ink basketball and also appeared in 2000 baseball Fleer products. Upper Deck first used stickers in 2000 Upper Deck Encore football and Topps joined the group in 2001 with Topps Reserve but did not use stickers again until 2004. Donruss also first used stickers in 2001. I actually have one.

I don't think these are the preferred method for getting autographs, but faced with the realities, companies really had no choice but to find a new way.

1. Shipping costs were increasing as more autograph sets were made and postage rose
2. Cards can get damaged in the shipping process
3. Late returns caused the need for often complicated redemption cards that collectors constantly gripe about 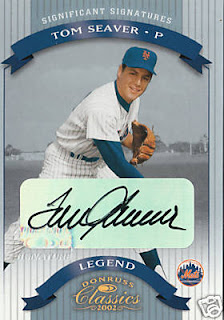 The first stickers were gaudy and took up a lot of the card, but they allowed companies to easily include the best player's in many sets across different brands with the player only hassled for one autograph signing. The companies also reaped many benefits.

However, while the companies were all excited over these cost-cutting benefits that increased supply, collector's had complaints of their own:

1. Stickers can be unattractive on cards
2. Stickers take away from the feel collectors get knowing the athlete handled their card
3. Stickers limit the athlete’s creativity in their signature
4. Stickers with non-centered autographs look very poor
5. Stickers can be affixed upside down or on the wrong player's card

Years after the beginnings of this part of the hobby, the companies have found ways to make the stickers less discreet and at time unnoticeable. By using clear stickers or a sticker that includes the company logo, collector's tend to more forgiving of pulling a sticker. However, some sets still include the obvious stickers and collectors never like it when one of those pops up in their pack. 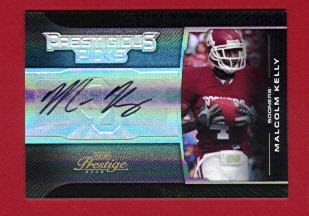 If you read through any established collector's preview or review of a product, you will know if the set had hard signed autographs because it is a big deal to have that nowadays. Sportkings was sure to publicly note that before releasing Sportkings Series B earlier this year knowing that it would help generate interest in the product.

Collector's can be assured hard-signed autographs every year for some sets though. Press Pass delivers autographs of perspective NFL Draft Picks on the cards every year. Many early NFL products also utilize on-card autograph for rookies that come to the NFL Rookie Premiere (like the Steve Smith card below from 2007). While sheets of stickers are also signed there, many cards are also on hand to be signed. Obviously these cards feature the player in their college threads, but it is better than nothing. 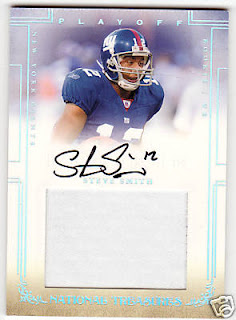 Thanks. Every now and then my busy schedule allows me to write a good post like this one.