A company two for one 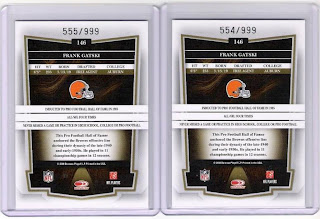 We all know about error cards that sometimes slip through the companies' finger's, but there is one company error that just a handful of collectors have had the joy of experiencing. One such collector can be found on Sports Card Forum.

The collector, 97S281_27, opened a pack of 2008 Donruss Classics and found a Frank Gatski card serial numbered to 999. After looking back through the pack, he discovered there was another Gatski stuck to the first. As it turned out, the cards were sequentially numbered 554 and 555.

A few other collectors then shared stories of their sequentially numbered cards pulled from one pack, including one collector who said he pulled two Adrian Peterson RPMs from one pack of 2007 Absolute Memorabilia. I haven't been lucky enough to pull sequential cards of even a lower end player, but I'm still holding out hope that my day may come at some point.

Has anyone else ever had a pull like this?
Posted by Andrew Harner at 10:03 AM

I actually got a 3 for 1 earlier this year. I bought a few packs of 2007 UD Future Stars from my local hobby, and one of them felt a little thick. Instead of the standard 4 cards, I pulled 6 cards out of that pack including 3 RC autos stuck together. Ryan Braun, Hunter Pence, And Felix Pie!!

The Pie actually had some bad foil damage, and when I called UD they sent me 5 Cubs cards to replace it. 4 autos, and a Ryne Sandberg game used.

Easily the best $4 I ever spent.