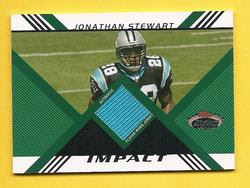 In the year that both Stadium Club football and baseball are returning as high-end product, many collectors have been anticipating both releases. For now, you have to be content with football as it hit stores today.

No longer is the set full of inserts, but rather filled with relics and autographs. Despite the designs of these cards being superb like you would expect, it still hurts the brand, which used to be the flagship offshoot for Topps.

One set they did a very nice job on is the Impact Relics. The 50 card set features both veterans and rookies and is numbered to 799. The set also has dual and triple relics and a gold parallel for each level. It was nice to see that Topps has put actual NFL jersey swatches on the rookies matching the team they are pictured in. The set would be hurting had they been forced to used college jerseys.

What's your take? Has Topps created a monster or have they adjusted an old, outdated set just right to accommodate today's demand? Or perhaps you think like me and think they did update what was becoming an outdated release, but they went just a little too far with.
Posted by Andrew Harner at 7:29 AM