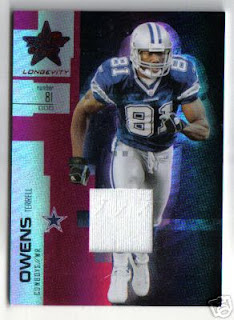 With worries of Terrell Owens' health status coming into Wild Card weekend, the Cowboys now have good news coming into their first playoff game of the year.

Owens practiced Thursday by catching balls, running routes, and only showing a slight limp at times.

TO was originally hurt on Dec. 22 against Carolina and sat out the season-finale in hopes of being healthy for the playoffs.

With the season he has had, Owens card values have inflated like his stats. This 2007 card is yet to be priced in Beckett, but should see a rise in market-value if the Cowboys make a long playoff run.
Posted by Andrew Harner at 7:31 AM