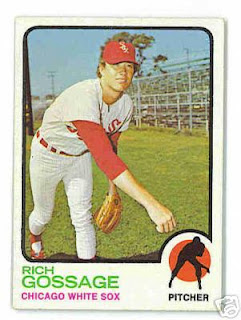 Falling short of the Hall of Fame for eight years now, Rich "Goose" Gossage looks to finally have his chance in 2008.

With a "weak" crop of players on this year's ballot, Goosage looks to be finally getting his due. He fell just 21 votes short of induction last year and has been gaining votes the past several years.

Goosage was called the most dominant closer ever by ESPN's Jayson Stark .

His 1973 Topps card shows a young, unfamiliar Goosage, but is still his most sought after card.
Posted by Andrew Harner at 10:20 AM