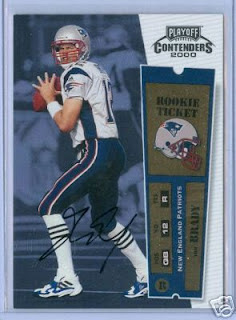 In what quickly became the hottest card of 2007, Tom Brady’s 2000 Playoff Contenders Rookie Ticket RC Auto is now selling for over $1,000.

It seemed that with every touchdown came an up arrow for the card’s value.

Just before the football season started up, the Brady card was listed in Beckett for $700 with an up arrow. The November/December Football Plus listed the card for $800 with an up arrow. Currently, a copy resides on eBay with a high bid of $1,025 with one day and four hours left.

And if Brady can carry the Pats to a Super Bowl victory and a 19-0 season, one can only imagine how much this card will sell for.
Posted by Andrew Harner at 5:41 AM