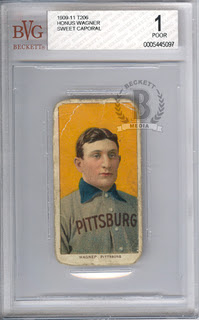 This collection includes the famous T206 Honus Wagner card which was graded a 1 in poor condition. The card has obvious rounded corners and a crease, but should still fetch well in excess of $100,000 at auction according to Bekcett's Grant Sandground.

But the Wagner is only part of this collection's story. The collection is believed to be the biggest ever personal collection found within the past 30 years. According to Beckett's blog, this collector has the cards in a box for decades.

It has not been released how the other HOFers graded or what the highest grades were, but the cards will be auctioned off through Beckett from March to April 10th when the Wagner will be sold.
Posted by Andrew Harner at 10:01 AM

The cool thing about this card is that it's part of a find -- never been outside of the guy's "attic" until now. Wonder how many more Wagners are hiding out there. Also, welcome to our blogroll, Cardboard Mania. -- ph

That's a good way to start a day. A comment from Beckett. Much appreciated.

I've always wondered what it would be like to stumble across an attic full of cards. I can't imagine too many are left out there.