Fighting Cancer One Card At A Time 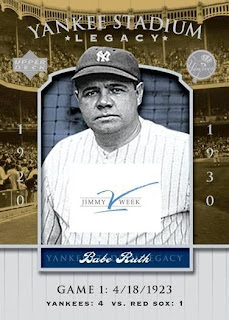 I'm sure many of my blog readers have come from or heard of the great trade site The Bench Trading. It's a good place to buy, sell, and trade cards with almost 6000 members. But right now, they are attempting a massive undertaking: complete the 2008 Upper Deck Yankee Stadium Legacy set.

If they do indeed build the entire 6500 card set, they will auction it off on eBay and 100% of the proceeds will go the V-Foundation for cancer research.

The site hopes to build this set through its members. They ask that members donate any of the cards they get to the project, and hopefully any duplicates can be used to acquire ones they need. The site can not buy them from members though.

A bonus to donating members is a contest. Each card a member donates, they will receive one entry into a drawing for prizes that include lots of game-used and autograph cards.

The set itself is a chronicle of every game every played at Yankee Stadium and will be seeded 1:4 packs of 2008 Upper Deck products. Other significant events such as Lou Gehrig's Luckiest Man speech, Babe Ruth's final appearance, and famous boxing matches will also be included.

Guinness World Records is also ready to mark this set as the largest ever baseball card set, but only after all of the products that will include it are released. These products are:

Outside of the 6500 regular cards, there will 42 Yankee greats featured on memorabilia cards. There are also 1000s of buyback autographs that will be utilized in UD products to promote the set.

Ambitious collectors like The Bench will be able to catalog their sets online using the alphanumeric codes on the backs of cards at http://www.OwnTheLegacy.com starting on February 1st.

For more information on the set or The Bench's efforts please visit the following sites:

If you need more information, feel free to leave a comment and I will try to find answers. Or, you can join The Bench and PM intelliracer or Taliasen.
Posted by Andrew Harner at 10:22 AM

This is Taliasen from the Bench. Please come check out our site and help this project along!