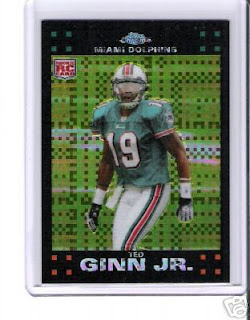 While there's no one on Ohio State's 2007-08 football team as good at returning kicks as the opening star of last year's BCS National Championship Game, the Buckeyes have made a return to the same game. On the very first play of last year's game, Ted Ginn Jr. ran a kickoff back for a touchdown, but proceded to injure his foot during the celebration. This forced him to watch from the sidelines as Florida racked up the points in a landslide victory.

However, the injury didn't hurt his draft status as he was taken with the #9 overall by the Miami Dolphins. His rookie year was solid as he scored a receiving touchdown and a return tochdown. Ginn had two other return TDs called back after penalties.

Topps Chrome Xfractors are some of the most sought after non-autographed or game-used rookies every year due to their attractive style. And 2007 was no exception with this Ginn bringing a book value of $20.
Posted by Andrew Harner at 2:56 PM