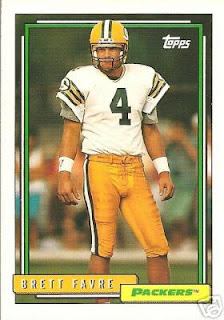 In 1992, Brett Favre was a young player for the Green Bay Packers. Fifteen years later, he is a living legend.

This is one of his first Pakcers cards and his first ever Topps card. The 1992 Topps football set didn't feature many stars because of contract issues. Therefore, Topps released a small set at the end of the year featuring the stars that were left out.

While this is nothing compared to his 1992 Stadium Club high series card, which routinely sells for over $100, it can be had for about $10.
Posted by Andrew Harner at 8:00 AM