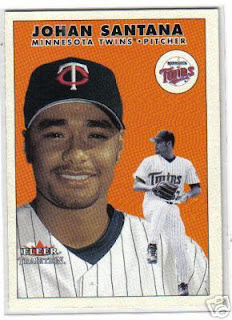 Being a Cleveland Indians fan, I was very happy to see that Johan Santana was traded away from the Minnesota Twins.

Even though Cleveland beat him five times last year, he is still good enough to no-hit you on any given day.

That being said, Santana's popularity in the hobby is a little bit understated. He hasn't gained the followings that Roger Clemens, Greg Maddux, and Randy Johnson had during their primes.

Sanatana rookies do, however, sell for a good amount and probably will see a spike in value as his new New York Mets fans buy his cards up.
Posted by Andrew Harner at 6:35 AM