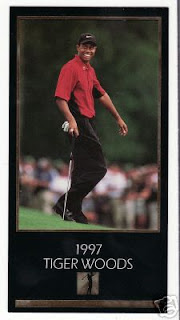 There is no argument that Tiger Woods dominants his sport like no other athlete.

With a 19 under par, 8-shot victory this past weekend at the Buick, Woods tied Arnold Palmer on the career wins list with 62.

And he says the best is yet to come including a year better than his 2000 season when he won three majors and nine overall tournaments.

That being said, perhaps it's time to invest in Tiger Woods cards again. Woods put golf cards out there after his 2000 season. Many consider the 2001 Upper Deck set the first real golf set.

However, Woods' first card hails from 1997 Grand Slam Ventures - The Masters and is a worthy investment if Tigers come true with his statement. You may also want to try to find his 1996 Sports Illustrated for Kids card before it gets too much higher in price (graded versions are already in the $200 range)
Posted by Andrew Harner at 7:44 AM