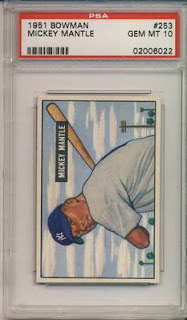 PSA has graded over 1,000 1951 Bowman Mantle’s but this is the only one that has ever been processed as Gem Mint. The card was graded during the 1990s and used to be owned by former Major League pitcher Tom Candiotti.

However, one other Mantle could bring even more cash in for someone.

A Memory Lane representative says that if one of the three PSA 10 1952 Topps Mantles were to hit the market, they would sell for over $1 million
Posted by Andrew Harner at 6:40 AM