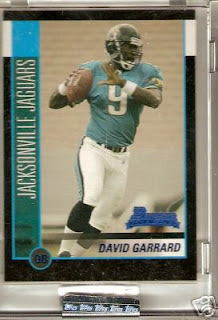 The Jacksonville Jaguars will take on the 16-0 New England Patriots in New England tonight in an intriguing playoff battle. Jacksonville has been dubbed the team no one wants to play, but after their poor second-half showing against Pittsburgh, that may all have changed. Despite, a great run play by David Garrard to seal the victory at the end of the game, the Jags might still have lingering after-effects from the game.

Garrard is finally getting his due after being drafted some six years ago and sitting behind Byron Leftwich. He has led to Jags to the playoffs, and with the help of Fred Taylor and Maurice Jones-Drew, may make history on this evening.
Posted by Andrew Harner at 9:48 AM