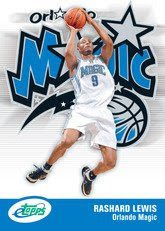 Being a Cavs fan, I naturally hate the Pistons kind of like how a Red Sox fan hates the Yankees.

With the Magic and Pistons tied at 100 last night, I was worried Detroit would roll in overtime. However, Lewis stepped in and a made a last second shot to win the game for Orlando. This was the first win over Detroit for Orlando in eight games (including playoffs).

While, this is Lewis's first year in Orlando, most of his key cards feature him in a Super Sonics uniform.

However, his 2007-08 eTopps card shows his doing what he does best in an Orlando uniform. And the design is gorgeous as well.
Posted by Andrew Harner at 2:56 PM