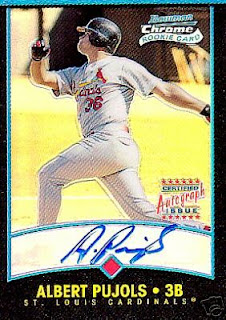 Here's one of those cards everyone wishes they could own. Whether it be for a personal collection or to sell, this card provides a great investment.

Numbered to just 500, this card became a hot commodity when Pujols broke out of his shell in 2001 as an unknown. It has continued to gain value as he has posted MVP-type seasons in every year since and became one of the best offensive players in the game.

What would you do? Or, what are you doing if you own one?
Posted by Andrew Harner at 7:09 PM

That is definitely a sweet card. Years back I almost bought one for $550, but I decided to go with the 2001 Donruss Signature Pujols instead because I was too cheap. Man am I kicking myself now! Keep up the good work on the site!!

In Pujol's 1st year, towards the end, I bought this card for $400. It was a risk because honestly then I didn't have that kind of money to just risk. Five years later, after having it graded (it came out as an 8.5 with a 10 autograph), I sold it for $3400. So the high risk high reward came out pretty well for me.

This card has taken a big down-turn in value. I have bought two more recently-one for $2000, great card, but with 60/40 centering, I am selling that one now on ebay and would be happy to just get what I paid. The other cost $2700 and looks perfect, with perfect centering. I plan on having that graded and keeping it. I mean, if it was to come out a 9.0 or even a 9.5, I hold onto it and when (not if) he makes the Hall of Fame I will have a very valuable card, don't you think?

i bought this card pujols rookie year for $500 it is a graded 9.5 with a 10 autograph and i have still yet to sell it