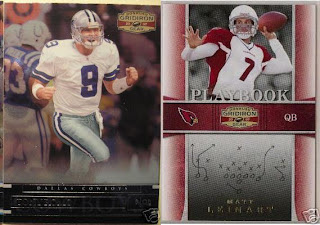 I bought one of those $10 four packs from K-Mart today, and wasn't overly impressed. The design is nice, but I got several duplicates within the four packs.

The Romo makes up for the subpar rest of the pack. If I were a Houston fan, I'd be a happy customer.

In the end, Pack 2 had three dupes. The Leinart is nice but doesn't quite make up for them.

Just a poor pack overall. Cutler was the only worthy card, and it's not even that great.

Excellant player selection. I kind of wish the Leinart would've been in this pack instead of Coles. That would've made for a nice $2.50 investment.

Now while I didn't get any cards to keep from this break, I won't knock Gridiron Gear too bad. The dupes make me skeptical about the Vintage brand four packs of cards, but not Gridiron Gear in general.

I feel Donruss/Playoff delivered a quality product at an affordable price even in retail stores. The decoys are huge. I thought I had a hit and it was just a big old white decoy.
Posted by Andrew Harner at 4:44 PM