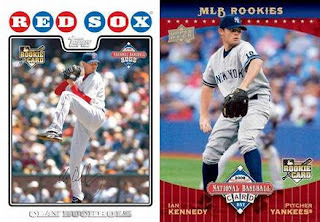 For the past few of years, baseball card companies have tried teaming up for a National Baseball Card Day release, but they haven't been too successful.

Topps and Upper Deck finally got a good set out in 2006 on National Baseball Card Day which fell the Saturday before Father's Day.

Saturday, participating Toys R Us stores, hobby shops, and ballparks will all be handing out promotional packs of the cards. Each pack will include five Upper Deck cards, five Topps cards, a Rookie insert from each company, and an information card.

The checklist includes the biggest names in baseball and six of the hottest rookies.

So go out and get yourself a couple of these packs Saturday and then try to complete your set on one of the trade sites listed in my blog roll.
Posted by Andrew Harner at 9:21 PM