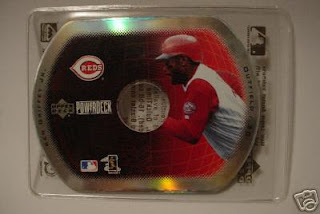 In the late 1990s, Upper Deck tried to incorporate the computer and trading cards for the first time. However, the Power Deck concept was a short-lived series.

The small disks sometimes would cause problems, especially when they would get trapped in the CD drive of a computer. They also didn't provide that much information. They did enhance the card business, but they never left that lasting impression.

Now, these CD-ROMS are forgotten pieces of whatever CDs are made of and nearly impossible to find outside of eBay or trading card forums.

Nevertheless, these disks are unique collectibles of the players that were featured in 1999 and 2000.
Posted by Andrew Harner at 1:44 PM