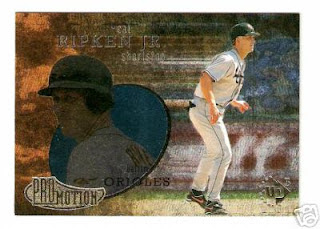 Right before the boom to include legends in new products hit, card companies were producing sets with a futuristic feel to them. Upper Deck's UD3 was one of the best examples.

UD3 only had a two year run, but they made some cards that should never be forgotten. UD3 utilized srial-numbering and die cuts in the base set more than any set had before. They also brought in different tiers to make the set chase a more difficult process.

Because of these challenges, I wonder how UD3 would have done had it been started in 1995 or so rather than 1997. That is because in 1999 and 2000 the rush to go back in time rather than forward started and sets like UD3 became completely irrelevant.

Upper Deck attempted to continue UD3 idea under two new names in 1999 and 2000, but UD Ionix and Upper Deck HoloGrFX just couldn't compete with the demand for Babe Ruth and Mickey Mantle cards that were then being produced.

So here's to Upper Deck for a great four year run of futristic cards back in fun days of collecting.
Posted by Andrew Harner at 8:03 AM