Card of the Day: 1999 Sports Illustrated Greats of the Game Autographs Rollie Fingers 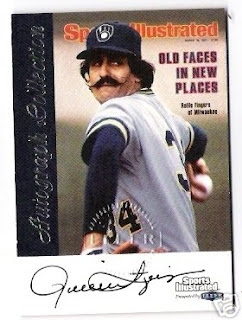 Sorry about not posting the past couple of days.

The 1999 Sports Illustrated Greats of the Game set was the set that put legends sets over the hump and into the mainstream baseball card market.

However, I would say that it wasn't necessarily the base cards that opened the door for other companies to mock the set. The autograph set was so successful that every company joined in on the legend set bandwagon.

The trend has continued all the way until this year. However, with just Topps and Upper Deck in the market nowadays, the multitude of sets is less, but there is still plenty of legends cards to collect.

A new concept may have emerged this year with Upper Deck's Yankee Stadium Legacy set, but we will have to wait and see.
Posted by Andrew Harner at 7:44 AM