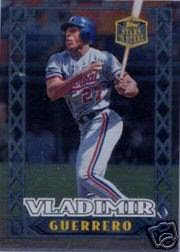 A short-lived off brand of Topps, Stars N Steel were some of the coolest cards from the late 1990s era.

From the years 1993-1999 card companies imployed many new technologies in hopes of producing the next big thing. The closest they got was Finest in 1993. Many issues were folded after just a year or two and Stars N Steel is a good example of that.

Stars N Steel enjoyed a two year run from 1998-99 and actually were valued in the upper tier of base cards at that time, though they were more like inserts than base.

Nevertheless, these heavy metal beauties are forgotten about nowadays only to be remembered when someone picks up a small box and wonders why it is so heavy,
Posted by Andrew Harner at 6:58 PM