Recollections on the past

I wasn't around for the big trading card boom of the late 1980s and early 1990s I know my first packs of cards were from 1991 Topps, but I don't really remember buying packs of cards until 1993 Topps Series Two - a time when the packs were some $0.79 at K-Mart. While the overall boom was still its latter stages at that time, I didn't know it. I was six.

As I got older and watched the card market fall and fall and fall, I started to understand just what had been happening to make the 1990 Donruss cards I had acquired so undesirable. Crazy how things work sometimes.

I ran across an article from Vinyl Dependent Magazine this morning discussing the how independent music stores are holding tightly to their last string as vinyl has seem a recent spike in popularity. Later on in the article, the writer discussed other popular trends from recent memory. Among them? Baseball cards. Below if the first excerpt on cards.

Unfortunately for the shops, all crazes, whether it be tulip bulbs, baseball cards, Beanie Babies, or bundles of over-leveraged assets, must come to an end. And when they do, they usually take the markets with them.

While the baseball card craze - so to speak - may be over, they still have a very large market. Shops may be closing one by one, but different kinds of shops have opened in the past years that will keep cards a float for many years to come: online shops like Blowout Cards and eBay. Unlike the Beanie Baby craze, cards stayed afloat long enough to benefit from the Internet. Sure it's killed their value, but it's at least allowed collectors to continue collecting. I'm sure there's someone out there with hordes of Beanie Babies still wishing there was a regular place he/she could buy, sell and trade them. But how long can the Internet continue to make cards a significant piece of popular culture?

As a young kid, I participated in the baseball card boom. A male childhood rite of passage went mad as Boomers sought out the 1952 Topps Mickey Mantles their mothers threw away. Card producers knew a good thing when they saw it, so they began to issue more and more card lines with limited production lines. Card shops popped up in mini-malls all over the country. Soon enough, you'd hear tales of Ken Griffey Jr. rookie cards going for $100 a pop. Huh?

The sports card industry consumed itself quickly. At the end all you had were vacant stores and angry middle-aged men who couldn’t believe their 100 Gregg Jefferies rookie cards were more valuable as coasters than investments. The card industry never recovered.

I don't quite think it's fair to say the card industry never recovered. It's never gotten back to its glory days, but it's also not on its last legs. For retail, yes cards on their last legs as finding a hobby shop is impossible. But because the industry has benefited from the Internet, it did recover to a certain degree. However, Gregg Jefferies rookie cards did not. 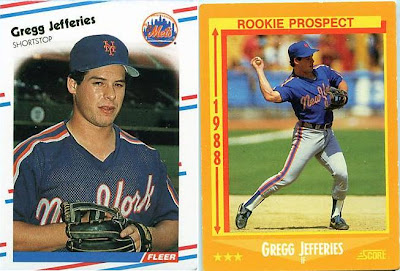 Posted by Andrew Harner at 7:18 AM