Why I am convinced it's a gimmick 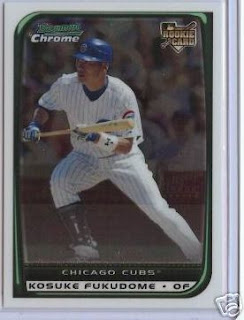 Soon after discovering the Kosuke Fukudome Bowman Chrome autograph error, many people began talking about it maybe being an honest manufacturing error. However, I am pretty well convinced it is an intentional short printed gimmick.

If you ask me, if it is a manufacturer's error, it's the same type of manufacturer's error that leaked a few Hillary Clinton Morganna The Kissing Bandit Presidential Predictor cards into packs of 2008 Upper Deck Series One earlier this year: an intentional one.

Back in the 1980s, there were several notable error cards that gained the card world a lot of notice. Billy Ripken's error was in the pages of USA Today just like the Jeter/Bush/Mantle card and the Giuliani Red Sox card were featured in all sorts of different mediums. Topps knows this and knows how many retail boxes sold out of Wal Mart, Toys R Us and other retail chains following the Jeter gimmick.

It seems we are in the second revolution of errors and variations. You can't tell me that all those mistakes in the 1980s and 1990s were accidents. Well you can, but I won't buy it. There hasn't been one short printed variation that isn't categorized as a gimmick by the hobby world since 2006 when it all started.

A true error from Topps is the 2008 Topps Limas Sweed wrong back rookie. I don't know how they messed it up, but I find that to be legitimate because everyone's cards are the same and no one has found a rare corrected version of it.

While I didn't report on it, I know there was a collector in Taiwan who supposedly pulled a ridiculous number Allen & Ginter rip cards from one box. Auctions for gimmicks always seem to include several from Taiwan collectors, such is the case with this Fukudome.

I should also not that the same collector who got all the rip cards also has one of these Fukudome cards.

Are these Taiwan sellers codeword for Topps? Could it be that Topps puts up these international auctions together just to promote themselves? I sure hope not, but any more, anything is possible from them.

It also doesn't help that this card is of one of the hottest players in the hobby worldwide. How convenient? Topps also loses some force considering they put out the base Topps Fukudome WBC card, a last minute SP of Fukudome in A&G and the UH1 Fukudome in Topps factory sets (which signals to me that there is something fishy involving Fukudome coming up in the real U&H).

As always, any new developments will be posted here as soon as I hear them.
Posted by Andrew Harner at 10:20 AM

Why would this have even been made period?

There are no Rookie Logo autos of ANYONE in BoChro!!!

I'm sticking with my previous call of shennanigans.

By the way, from looking through future checklists, I don't think we will ever see a Topps Fukudome autograph. They all look to be in UD products.

The Topps Certified Issue logo in on all sorts of Bowman Chrome autographs.

Not the cards with the Rookie Card Logo.

Ah, I see what you mean now.