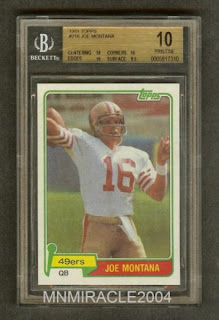 The only Joe Montana Topps rookie card to ever receive a pristine 10 from BGS has surfaced on eBay and currently sits at $33,100 with the reserve yet to be met.

There is still 36 hours remaining on this auction so it is hard to say how high this card might go or what the reserve is. However, there are some people around the Internet who think this seller is too good to be true.

Users on Sports Card Forum have speculated anything from the seller works or knows someone at BGS or is shill bidding on this card.

Reasons for for their first point is because the seller currently has 62 eBay listings that are all high end cards of key players with the best Tom Brady, Peyton Manning, Albert Pujols and LeBron James rookies included. Many of these cards are also highly graded by Beckett.

Here is what one user posted:

"Somethings not right about this. If you look through his inventory he has way to much high end Beckett graded things. He either works there and is grading it himself or he has someone on the inside heping (sic) him. Theres (sic) no way someone could have that many high end things just by luck!"

The users on the forum are not realizing that someone can have this type of graded inventory without having connections. It's not hard for the highest of high-end dealers to acquire all these key rookies and have them slabbed. Every time you see such a collection on eBay, you have that initial "I wonder if this is too good to be true" thought, but it never lingers more than a few second once you really look at the seller's inventory.

As for the shill bidding point, I have one thing to say to those users: off eBay offer. It is very likely that the seller has an offer to the side that a collector not on eBay has given him (perhaps $50,000). At the same time, it's possible for any auction to be "shill bidded" by the seller, but again, no one really thinks about it until a high end auction like this pops up.

However, there is one thing I noticed (as well as members in the same SCF thread I've been referring to) about this card that does seem a little fishy. Based on the picture above, the front has all the look of a pristine card, but let me show the image of the back. 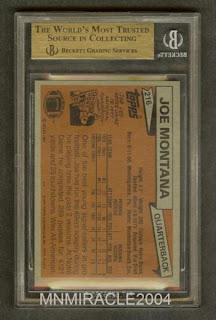 If you need a better look, click the image for a larger view

Maybe, as a SCF member suggested, there will someday be an uncut sheet of 1981 Topps cards that includes a Montana and that the collector who owns it will be willing to cut it and make a Joe Montana pristine rookie with a centered back. If not, maybe there will be one discovered somewhere. There's bound to be another 10-worth Montana out there somewhere, right?

Does anyone else have an opinion about this card?
Posted by Andrew Harner at 7:07 AM

With all of the ethical problems with Beckett grading, I have no idea why anyone would spend a significant amount of money on a card graded by them. I'd pay more for an ungraded card and stick with a reputable grader, PSA.