It's nice that smeone else understands 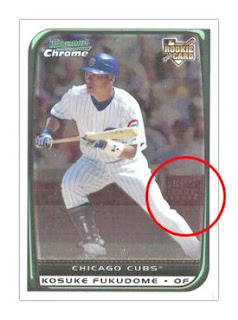 Wow, I wish I would've jumped on this when it first came out four days ago, but that's what working for a real newspaper will do to you. In fact, the night of August 27th I was in the newsroom for almost 8 hours after my classes.

Anywho, I am happy to see that Topps had said something about the Kosuke Fukudome Bowman Chrome card that actually shows that I am right win my assumption this is gimmick.

Here is what Topps said about the card:

So for those boneheads out there who criticized me for calling this a gimmick, I think you may want to think a little more before you type next time.
Posted by Andrew Harner at 2:20 PM