The other series two from Topps 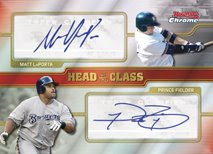 I don't mean the base Topps series two that came out however long ago, I'm talking about the Bowman Chrome releasing today which might as well be Bowman Chrome and Prospect Series Two if you think about it.

Every box of Bowman Chrome will include two prospects per pack and one prospect autograph per box. There are also the same levels of parallels (six per box) you've come to expect to find Chrome - Refractor /500, Xfractor /250, Blue Refractor /100, Gold Refractor /50, Orange Refractor /25, Red Refractor /5 and Superfractor /1 - creating another set that causes player and team collectors to have a migraine.

There is one new set included in Bowman Chrome, Head of the Class dual autographs. In this set, a former first round pick is matched up with a current MLB star. These come in Refarctor /99, Gold /50 and Superfractor /1 parallels and also feature those bright silver refractive stickers Topps is fond of using.

According to Topps' checklist, there are only three autographs in the set:

I would've liked to have seen more autographs in this set as it is a unique concept that will now cost a fortune since there are only three cards available. It would also separate 2008 Bowman Chrome from the last few years which have been the same as this year's. Bowman Chrome seems to slowly be becoming a very cut and dry product with no new glitz and glamor, making it a very boring product in my eyes.
Posted by Andrew Harner at 7:39 AM

There are only three "Head of the Class" autographs but there are a ton more autographed cards in the set that are single auto's...