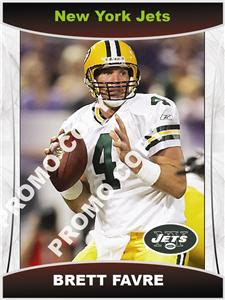 It was only a matter of time before all the digitally produced Brett Favre Jets images were going to appear. This collector took it to a new level and conned someone out of $1.

While it was merely $1, this seller still advertised a custom-made Brett Favre "signed by Jets" digital trading card. By bidding, you would receive an e-mail copy of this digital card, presumably without the promo markings in the image above.

Worse yet, he doctored up this photo (which looks terrible in my opinion) and is getting at $3.25 out of it. I don't know if people just aren't reading that they will receive a digital version of this picture or what, but I don't understand what the point of bidding on these things is.

If you were to wait just a few more days, there will be Associated Press photos of Favre practicing with the team in his Jets jersey so why on earth would you pay for a poorly produced digital image of Favre in his Jets jersey?
Posted by Andrew Harner at 12:11 PM

At least the postage is free.