Phelps gets first in his quest for eight 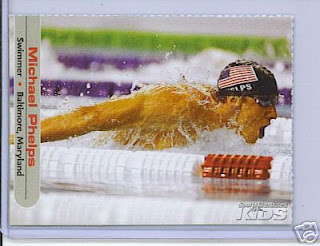 Olympians aren't really known for having trading cards. Michael Phelps may be changing all that.

With a win and new world record time in this morning's 400-meter individual medley, Phelps has taken the first step towards winning eight Olympic medals. Tonight at 11:33 EST, his second race, the 4X100 meter relay, starts with the Americans being favored by some and expected to finish second to France by others.

While some Olympians have been featured in sets like Topps Allen & Ginter, Phelps' attempt at breaking Mark Spitz's medal record could land him in quite a few trading card sets including any late editions of Donruss celebrity sets and undoubtedly next year's Donruss celebrity set.

Honestly, I am surprised no company has made an Olympian set within a sports product this year. As big of a deal as there are making about producing political cards, you would think someone would've said "Well, the Olympics are this year and you know all the buzz there will be about Michael Phelps." Combine that buzz with all the talk about Dara Torres and think about the publicity that set would be gathering right now.

But, collectors will simply have to settle for a Phelps Sports Illustrated for Kids as his most plentiful card. He also appeared in the Donruss Fans of the Game series as well as other Olympic promotional cards. Torres, meanwhile, had a card released in the 1992 Impel Olympics series.
Posted by Andrew Harner at 3:10 PM