The hottest card on the market? 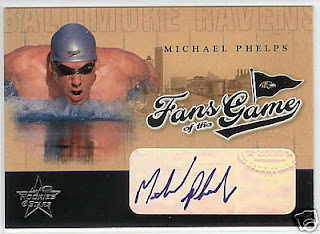 After making history with his eighth gold medal in the 2008 Olympics, Michael Phelps' one mainstream trading card has absolutely skyrocketed in value.

Born and raised in Baltimore, many fans of the Baltimore Ravens stayed in the stadium after a 23-15 loss to the Minnesota Vikings just to watch their hometown hero go for the record. Much to their pleasure, the USA 4X100 medley relay team continued the American domination of the event in a world record time.

With that record came strong sales on Phelps' only certified autograph which can be found in 2004 Leaf Rookies and Stars football as part of the Fans of the Game series. Two weeks ago, the first Phelps autograph appeared in anticipation for the Olympics selling for $98, seven days ago when his Olympic quest was just starting one of the autographs ended on eBay for just $140 and four days later, the price had jumped $300 to $449. The first two auctions to end after his record included a $650 sale and the $700 sale. Currently there are several auctions for the card that have been bid up to the $400 range. 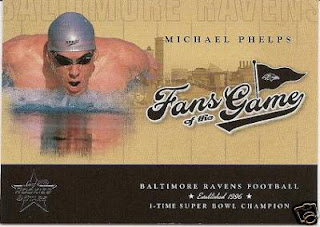 So that's too expensive for your budget so you suppose you'll just buy the non autograph version of the card. Well, it isn't just that simple. As with the autograph, sales are through the roof on that card as well.

The card wasn't seen on eBay too much before August 14 when the first two copies of it sold for $55 and $50. The card continued to climb in sale value until reaching the $100 mark for the first time on Saturday evening and topping out at $177.50 just after the record. Current listings for the card have settled into the $50-$65 range with the chance of being bid to the $75-$80 before they end.

Just as with any big accomplishment, the market for these cards will diminish as the allure of this record settles in. Whoever gave $170 for the regular version of this card wasn't thinking straight or just didn't think it through when they made the purchase. Personally, I wish I had one of these to sell now so I would have enough money to buy another in a few months and still have some green leftover.
Posted by Andrew Harner at 1:47 PM