This guy drives me nuts 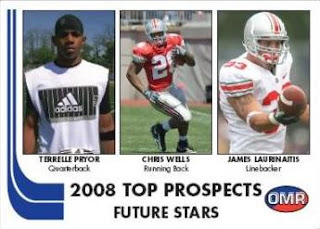 This guy has always bothered me, but I've never actually came out and said it before. This guy is finatic719.

You probably know him as the guy who produces cards of top rookie prospects and then tries to sell them on eBay to people who don't know much about collecting. Thankfully, most of these cards go unsold, but every now and then, some do sell.

Sometimes, he does sell legitimate cards, but he does most of his business off of cards from the GEM brand, OMR brand or the GTC brand. I'm fairly certain that he creates these himself and he doesn't say that they are licensed. However, he also doesn't say these are legitimate trading cards.

His listings usually are filled with errors and gluttony like "most sought after rookie card" and "rare."

While he does bother me, there's nothing to stop him from doing what he is doing. There is no rule on eBay saying you can't sell stuff you make. He gives the brand and the year as well as the print run, but he does it in a way that is deceiving to novice card collectors.
Posted by Andrew Harner at 6:42 PM

I've been wondering about those GTC cards myself for quite a while. I bought one of Kevin Love, of course I knew exactly what it was, and I paid next to nothing.

But I see quite a few of them, from different sellers. A search online doesn't come up with much, I can't even find a homepage for them.

I'd never heard of these before. Interesting. Bootleg cards have been around since at least the 70's. Heck, if you print up enough of them they'll become semi-legitimate like old TCMA cards. Not cool to be misrepresenting them though.

Is there a licensing issue here with OSU? I didn't think he can sell anything Ohio State related without their consent?

I think if he takes all the logos off he is fine in that department. If you notice, there isn't any logos at all on this card.