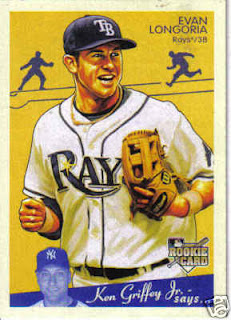 For as much as I hate intentional gimmick cards, I enjoy a good old fashioned error card. I'm not really sure how I missed this one way back when Goudey dropped, but I just got word of this card this morning.

The Evan Longoria card from Goudey has an interesting error, considering it interchanges two of the most popular players in all of baseball: Ken Griffey Jr. and Derek Jeter.

How this error went unnoticed is hard to say, but it doesn't appear that it will be corrected or is short printed.
Posted by Andrew Harner at 9:21 AM