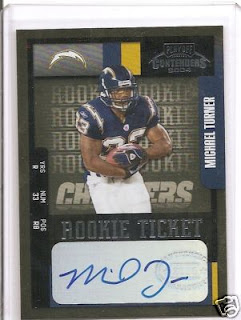 With 331 new eBay listings in the past 24 hours, Michael Turner has become the newest short term hobby darling.

Every single year, there are several running backs who go off for one or two games and become the hobby story of the week. In week one, Turner was the guy after finishing with 220 yards and two touchdowns in his Atlanta Falcons debut against the Detroit Lions' weak defense.

Let me stress that point once more: the Detroit Lions' weak defense.

Yes, Turner did make them look silly, but the Lions weren't tackling anyone, so why should I be all excited over Turner's cards? He is bound to have a good year, but I don't think his Playoff Contenders autograph will be commanding nearly $200 at season's end (barring him leading the Falcons to the playoffs or rushing for 200 yards every game).

In the past 30 days, Turner had 234 eBay auctions. Currently, he has 394 listings, and he had around 70 before the game. I am staying away from anyone who's listings increase by almost 500% just because of one incident and waiting for a time when the market is less demanding.

Other notable week one performances that will affect the card industry: